The process of creating applications and websites is web development. It has nothing to do with the website’s design. Rather, it’s all about programming abilities and coding, as well as the functionality involved. The functionality, thus, mentioned, relies on various types of layers. With that in mind, here’s an article on “Front End vs Back End Web Development Explained.”

It’s commonly referred to as Client-Side Development. The Front End focuses on everything you experience, touch, see and interact with on an application or on a site. That includes the contact forms, fonts, colors, menus, and layout.

Say a Front End developer did not have access to Back End Web Development. In that case, they would be developing a “static website.”

The site’s Front End structure houses all the information stored within it. It does so by using CSS, HTML, and JavaScript.

JavaScript uses interactive elements that allow you to control how objects move, change, and switch. It’s good for modal windows and contact forms.

CSS generates styles that will be relevant and apply to the entire website. It defines colors, layouts, and thoughts.

It’s the basic scripting language for creating and organizing web content so that you can see it in a browser.

On the other side of things, you have the Back End, which is commonly referred to as Server-Side Development. It focuses on aspects such as algorithms, data, and functionality.

Back End Development primarily comprises the things that make the car move. That is contrary to the Front End, which rather focuses on how the car looks.

The Back End of a website is all about what’s going on behind the scenes. It may also refer to as the Server-Side Back End.

It’s essentially the part of a website that the user doesn’t see. Back End is responsible for organizing and storing data. Also, it ensures that everything on the Front End runs smoothly.

They would then store the data and manage it for easy usage. The Front End will then have connection points with the Back End.

Whenever the browser requests something from the Front End, the server will receive Back End as a Server-Side request. It’ll then gather the relevant required info and return it to fill up the values and space.

This type of web development relies on Back End languages such as Python, Ruby, PHP, and Java.

If you like working on layouts and care about user experience, then Front End Development would be for you. In contrast, in case you lean more towards algorithms and data, go for Back End Development.

You may have missed 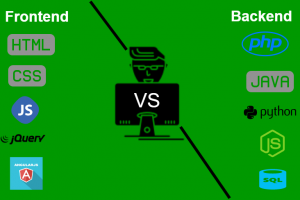